If you are experiencing frame drops, stutters, de-syncs, or just timing issues in general - read on.

You should check out this guide by Otaquest which contains lots of useful information.

(While it is a good starter guide, contrary to what Otaquest suggests, you should not turn off vertical sync.)

Use a discrete, dedicated GPU

Some laptops have hybrid graphics; a hardware configuration where both processor-integrated GPU and dedicated / discrete GPU are present, and they are switched on demand.

Sometimes, the driver fails to detect Infinitas as a game, and utilizes the weak integrated GPU instead of the powerful discrete GPU. In some rare cases, even if the game initially launches on the dedicated GPU, your laptop may decide to move the workload off to the integrated GPU (e.g., due to thermal issues).

If you are having issues with performance, you’ll need to find some way to force the usage of the discrete GPU. This is entirely dependent on the laptop manufacturer, so you’ll need to search online how to accomplish this.

You can use Task Manager in Windows to figure out which GPU is being used to run the game.

If you are seeing issues (e.g., completely black screen, black bars around screen, incorrect aspect ratio, image cut off), you should enable GPU-side resolution scaling. This causes your GPU to initially render the game at 720p, and then upscale to your monitor’s native panel resolution. This would side step any issues with resolution scaling done by your monitor.

It should be noted that changing the resolution of your Windows desktop does not have any effect on Infinitas, as it is an exclusive full screen game, which means the mode will change when the game launches.

In NVIDIA Control Panel, this can be accomplished in the page shown below. Select Aspect ratio and perform scaling on GPU.

It’s worth noting that the drop-down list of resolution is only a preview and does not actually change your resolution settings. 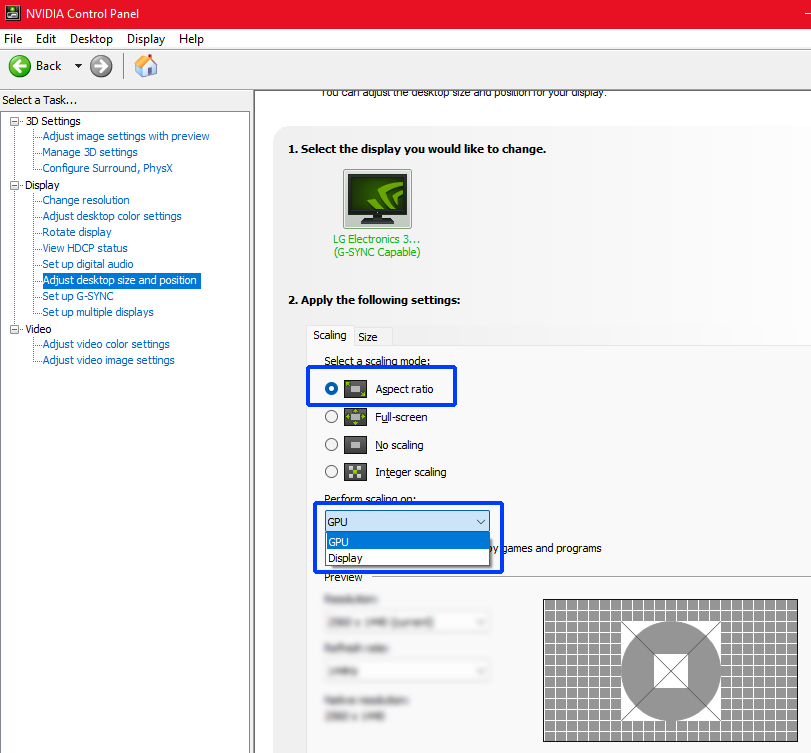 On some monitors, or more commonly on laptops - it’s common to see panels with maximum refresh rate of 144Hz. Sometimes the game would launch at 144Hz and not 120Hz, which would cause major issues with desyncs.

To check what refresh rate your game is running at, you should:

You might also want to check the user manual of your monitor to see the list of supported resolutions and refresh rates. Unfortunately this is a bit harder on laptops; you could check the FPS instead while the game is running.

If the monitor is not running at 60Hz or 120Hz while the game is running:

Again, it should be noted that changing the refresh rate of your Windows desktop does not have any effect on Infinitas, as it is an exclusive full screen game, which means the mode will change when the game launches.

Disable any kind of VRR features, such as FreeSync or G-Sync. This can be done in the GPU settings (e.g., NVIDIA control panel) or in the monitor’s on-screen display. VRR is very well known to cause desync issues, so it must be disabled for this game.

You should double check that G-Sync and FreeSync actually gets turned off by starting the game and pressing buttons on your monitors to bring up the On-Screen Display and poking around. Even when a profile is set for a game (e.g., in NVIDIA Control Panel), oftentimes it stays on for some reason. The only way to be sure is to disable the feature entirely for all games, or if possible, turn it off using the monitor OSD.

Also note that FreeSync is sometimes called “Adaptive Sync” on some monitor models.

The game will request to run with vertical sync, you should allow it. Usually, this is not an issue as the game will automatically turn it on, but some users manually force v-sync off; you should not do that for Infinitas.

By default, your GPU driver will try to save power by using a lower clock rate for 2D applications like Infinitas. It’s possible that the driver isn’t able to provide sufficient graphics processing power at these low clock rates. This usually manifests as unstable framerate (e.g., varying between 119.00 and 120.00 FPS which is enough to affect timing).

In NVIDIA Control Panel this can be changed using power management mode drop-down and choosing Prefer maximum performance - see the section below.

Here, a profile was added for bm2dx.exe, which is located in C:\Games\beatmania IIDX INFINITAS\game\app by default. 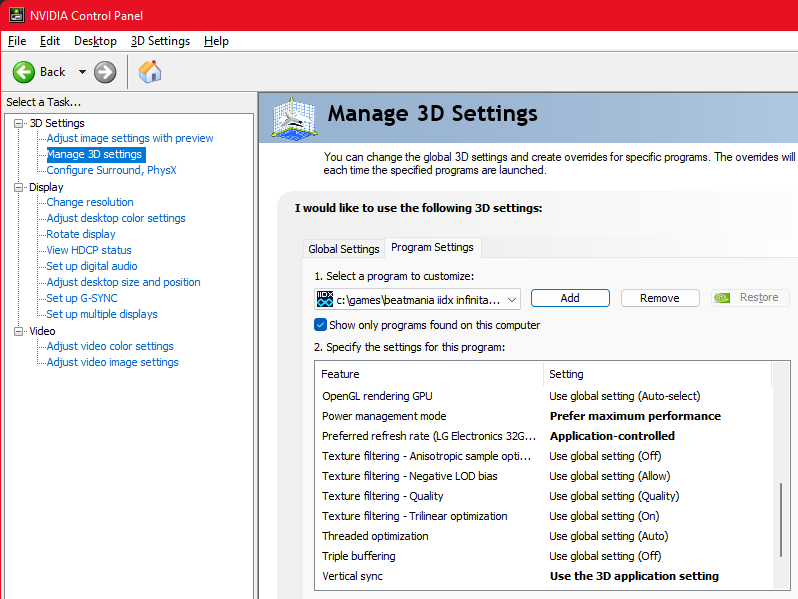 IIDX is a key-sounded game, therefore you want the lowest possible latency in your audio setup. While you can compensate for display input latency using offset, audio latency cannot be compensated for.

Sending audio over HDMI / DisplayPort is not recommended, and so is using the built-in speakers in your display (TV, monitor). This will almost certainly result in slightly delayed audio.

Wireless headsets should also be avoided. Bluetooth should be avoided at all costs; some wireless gaming headsets might work but still not the best option.

Fancy DACs and sound cards may or may not work

If you have a DAC or a headphone amp – including speakers with USB input, or audio devices built into gaming laptops - you might experience issues like crackling sounds or dropped audio.

Typically, use the simplest audio device available, such as Realtek audio devices present on many motherboards, as they are expected to be compatible with wide variety of applications.

Infinitas uses WASAPI, and you can select between exclusive and shared mode in the launcher.

First option is exclusive, and second is shared.

Shared mode allows for audio to be captured by other applications (e.g., OBS, Discord), but has higher latency.

Exclusive mode results in noticeably lower latency, but prevents other audio applications from using the device, and disallows capture.

In general, exclusive mode should be preferred. That being said, one or the other option may work better for your environment. If you have issues, such as crackling audio, desyncs, or silence, you should try the other option.

The secret third option is to use ASIO, but it does not provide significant advantages over exclusive mode WASAPI.

Follow these instructions to disable audio effects and enhancements, which may (or may not) decrease end-to-end latency.

Audio drivers supplied by the manufacturer (looking at you, Realtek) might be less than ideal and result in higher than expected latency. You may be able to use a driver built into Windows instead and achieve lower latency - see here. You may lose some advanced audio features, however.

In some rare cases, your system may have performance issues with Infinitas caused by processors being downclocked while the game is running. If you have repeated & periodic stutters and frame drops (e.g., frame drops and spikes every 5-10 seconds or so) then it’s likely caused by this. While this isn’t an issue for most PC games, Infinitas in particular can be affected since its engine was originally designed for an arcade cabinet.

Adjust your power plan by following the guide here and change to High Performance. This will make your system run at full power at all times, consuming more power and generating lot of heat in the process. Remember to revert back to the default power plan when you are done playing.

Try disabling overlays and always-on screen recording software, such as:

If you have background processes running, it may disrupt the system enough to cause stutters or desync.

Common issues to watch out for:

You can try keeping Task Manager open on another monitor to monitor what is taking up CPU time. You could also note down the time when major glitches occur, and check the Windows Event Log to see if any events have been logged.

Some suggest turning off full screen optimizations if the game desyncs occasionally. Here is an official explanation on what the feature is, and why you want to turn it off (or leave it on). Your mileage may vary.

This should be done by finding the bm2dx.exe executable (by default located in C:\Games\beatmania IIDX INFINITAS\game\app), right-click to Properties, Compatibility tab, and checking Disable fullscreen optimizations.

Some AMD systems are known to cause stutters when performing TPM (Trusted Platform Module / basically a security chip) operations, which can happen at random - see here. AMD recommends a BIOS update, or disabling fTPM.

Some older systems with hardware TPM may cause stutters as well. If this is not a feature you need, you might want to consider disabling it in the BIOS. Do note that Windows 11 requires a TPM to be enabled.

If you are having trouble with the game not recognizing your controllers:

If the game “tabs out” to desktop and repeatedly exits out of full screen by itself, some random application may be stealing your mouse and/or keyboard focus. Use this tool to troubleshoot.