Information here applies to beatmania IIDX 30 RESIDENT, as many significant changes have been made from CastHour. For CastHour information, please refer to the archived page.

This page is an active work in progress; information will be updated as available. It has been assumed that American region cabs will follow Asia region, but this is not yet fully confirmed.

This is the most commonly played game mode on AC. 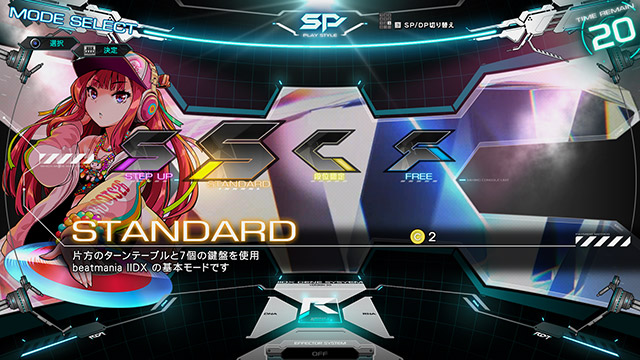 You are not guaranteed three songs, however. If you fail to clear the song, you do not advance to the next stage. Exception is given to the first stage - if you fail a song that is level 5 or under, you can still advance to the second stage.

Same song cannot be chosen more than once.

To enter Extra Stage, certain conditions must be met in the final stage. These are the requirements that hold true since Happy Sky.

There are important regional differences to note:

Special Extra stage and One More Extra stage can also be accessed during events. The requirements depend on the active event.

Free mode is visually similar to Standard mode, but is less restrictive when it comes to what songs you can play, at higher cost to you (or fewer songs).

There are many variations: 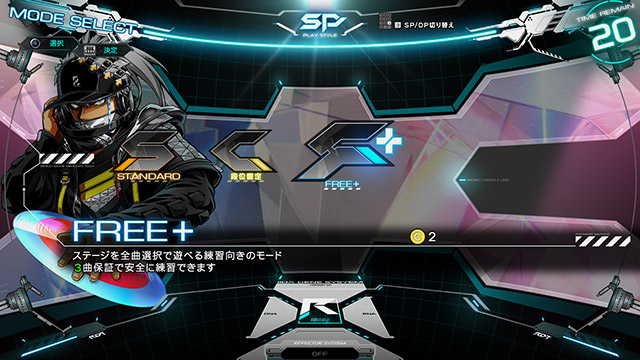 Selectable from Mode Select if two players are active. Three songs are guaranteed. 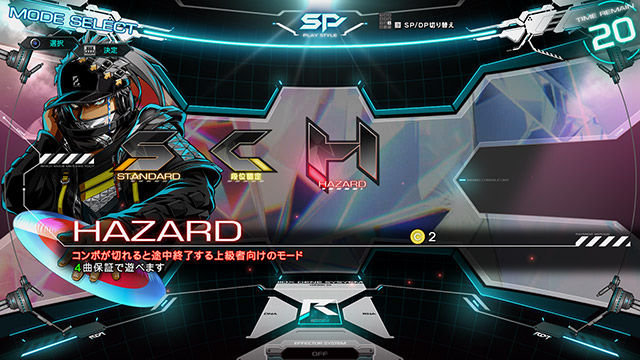 In Mode Select, if you press all three black keys, you can switch to Hazard mode. You are guaranteed four songs, but you play on Hazard gauge which immediately fails you out if you lose a combo. EXPAND JUDGE is disabled. 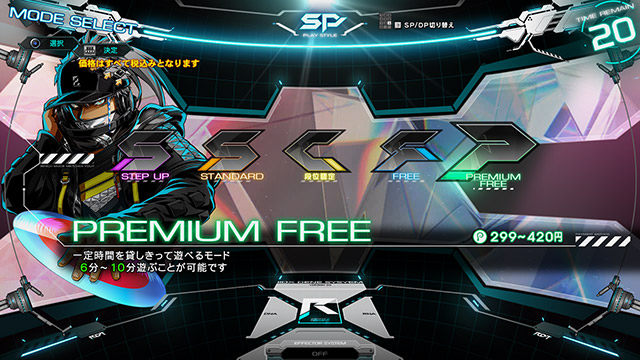 You are given a time limit, but you can play any number of songs without restrictions. This tends to be the most expensive option, but the most flexible way to play. 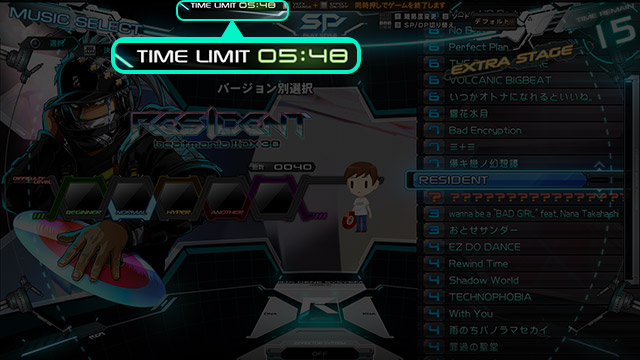 In Japan: this is a PASELI only mode, ranging from 6-30 minutes.

In regions outside of Japan: can be accessed by coin play, price configurable by operator, usually 1.5 - 2 times the price of a standard play. Fixed to 10 minutes. It can be disabled by the operator. This also the only way to play a session with V-Discs - see V-Discs section below.

If you are subscribed to eamusement Premium course and activated Platinum Members Card on the profile, you can perform Quick Retry; by holding VEFX + EFFECT ON keys during the song, you can restart the song without going through the result screen.

Three songs are guaranteed, but sometimes you can play four. This is a “training” mode that also has a story and hidden unlockables. 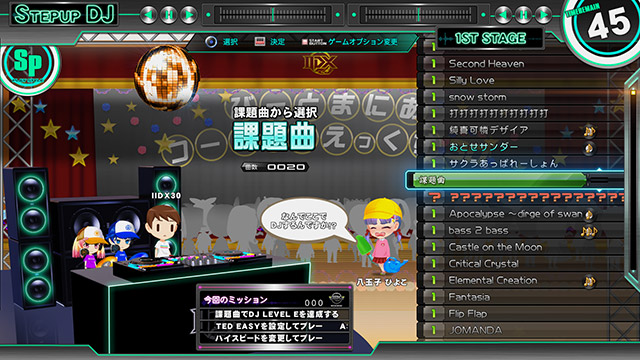 The step-up level is carried over from the previous version, but with an upper limit (level 9s). If you play class mode before entering Step Up mode for the first time, you will get an appropriate initial placement. If you play Step Up without doing that, you will start on level 1s.

Depending on your result, your step-up level will change. The most impactful factor is your DJ level. Getting a higher rating (AAA) will result in a greater increase.

HARD and EX-HARD gauge clears will result in a slightly larger increase, but fails will have less impact than a normal gauge; however, this is negated if you fail out early in a song and end up with a very low DJ LEVEL (E or F). FULL COMBO clear will greatly increase the level.

There is no penalty of any kind for using EXPAND-JUDGE.

Normally, new songs from the current versions do not show up in this folder. Once you complete the entire step-up story and see the ending, then you will start to see new songs show up.

A new folder will appear once you beat the entire “story” for step-up mode. This is similar to the regular Tasks folder, except that new songs from the current version will also show up.

There are up to twelve folders for each level. You can only open folders that are 1 level below the current step-up level. It contains songs that you have already played in other modes, with the following restrictions:

Once you fail a class in class mode, a new folder will show up to practice four songs from that course. Class mode gauge (expert gauge) is used instead; it starts at 100% in the beginning of each song, but it can be changed by holding the VEFX + EFFECT button and pressing number on the number pad.

In RESIDENT, you can adjust the amount in which your step-up level increases or decreases. Hold VEFX+Effect, and press keypad #5; cycle through 小 (small) 中 (medium) 大 (large).

(This option is currently bugged and may not correctly show for everyone - it’s suspected that it only shows up when you card in from 1p side). 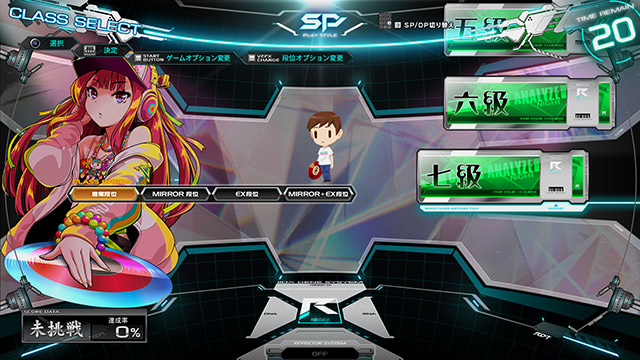 Class mode (dan-i-nintei) measures your skill level by playing through a pre-defined course of four songs, and awards you with a badge of honor.

Check out the page on class mode for courses in recent versions; also Remywiki has a very good explanation of the mode and the songs in each version.

Daily bonuses have been removed except one: on Saturdays (Japan time), restrictions are lifted for review level folders.

In this section, we will focus on Asia and American region cabinets for simplicity. For Japanese cabs, refer to the official site. Remember that at American Round 1 locations, Lightning Model cabs are American region, while the old cabs are Japan region, but PASELI cannot be used.

For Japan region cabs, V-Disc is premium feature only available when playing with PASELI.

In other regions, only Premium Free mode provides V-Discs. You are given:

In Premium Free, 1 V-Disc is be spent for each LEGGENDARIA chart played.

At the end of each credit: 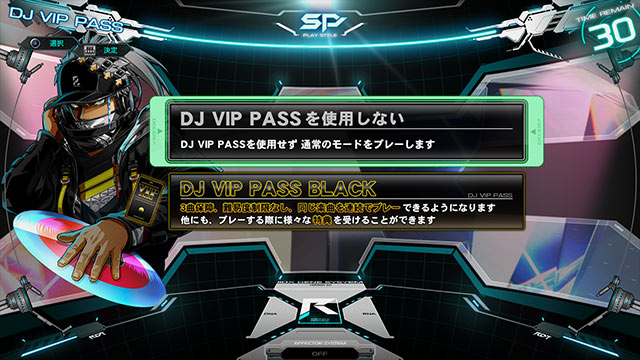 If you have one from collecting 100 unused V-Discs – you can choose it before going into Standard mode. DJ VIP PASS BLACK gives you all V-Disc benefits for free – guarantees three stages, removes level restrictions in all stages, advances you to Extra Stage if you clear final stage without needing to meet the requirements, allows Leggendaria charts, and allows you to pick the same song more than once.