This is a direct translation of SILLYB’s article by Horie.

I don’t enjoy writing guides on playing DP, but I did want to talk about this. For the record, the button numbers will refer to buttons on the right hand. (TL note: this means the leftmost button on 2p side is button 1)

The “controversy” on which technique is better – middle 5 vs. middle 6 – has not been around long, as existing top DP rankers already favored middle 6.

It might be a bit embarrassing to call myself a ranker, but anyway, I might be the only one who uses middle 5 among DP top rankers.

A long time ago, there was an EZ2DJ player who used bizzarre playstyle of S24 / 135, but they could beat Messier 333 HARD (TL Note: this was a boss song in EZ2DJ 7th TRAX BERA). I believe a playstyle like that has a lot more cons than pros, but in theory it would work like a charm for denim patterns.

Similarly, I think middle 5 has more cons than pros.

The main disadvantage is that it takes quite a long time to learn and get used to.

I have been using middle 5 since 2009. Back then, I used a 1:1 position to play SP***. Only until 2015 or so, I barely hard cleared all 12s, except Beach Side Bunny. At that point, I felt my limitations in SP and started to play DP instead. Because of that, I naturally learned how to bend down my middle finger. 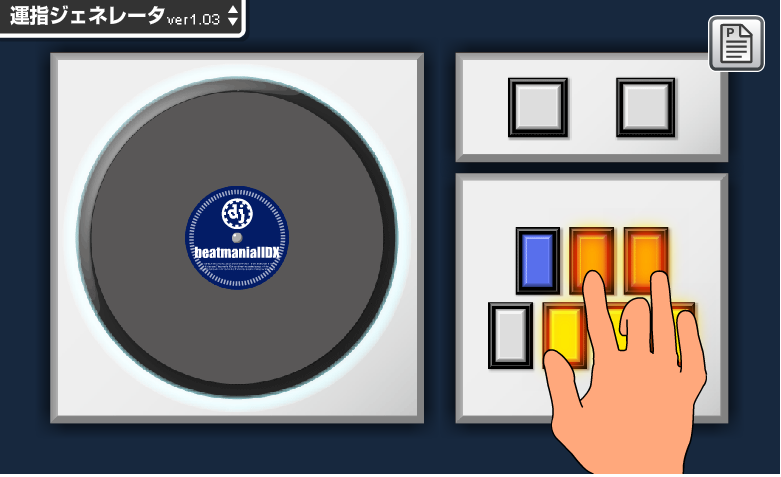 That means I utilized this technique for about 6 years, from 2009 to 2020, not counting the years I spent in the military or when I took breaks. (Worth noting that I played piano for 7 years before playing IIDX)

Anyways, I got used bending my middle finger because I had such background, not just because I think it’s good for DP.

But the situation for middle 6 is different. There must be a reason for most top players using middle 6.

One of the downsides of middle 6 is how it affects the angle and center position of your hand; it creates a slight imbalance, shifting away from the basic position, but it doesn’t affect it too much. You can check how it goes in C.C.’s streams (TL note: C.C. is a one hand top ranker).

Today, while grinding SEQUENCE CAT, I realized that the ring finger is the most important factor in DP.

You can always move your index and thumb fingers with ease, but you cannot easily move the ring finger because its tendon is connected to the middle finger. This means that the ring finger cannot be completely independent.

Even pianists feel the pain of the ring finger not being 100% independent. That is the whole reason for Chopin composing Etude which teaches you how to practice middle-ring-pinky independence.

As you improve your ring finger’s independence, your hand positions will become more flexible. You can see an example of this in ereter’s X-DEN EX-HARD video. You could think, ‘is it really necessary to use the ring finger to hokuto hit 2-3 trills on the left hand’, but the correct way to internalize this is that because he does that often, it’s possible for him to hit a large variety of patterns.

In conclusion, before you start debating middle 5 versus middle 6, I recommend that you practice ring finger independence. The stronger you make your ring finger, the stronger your overall skill will be. Once you’ve done that, you can choose either middle 5 or middle 6 freely depending on your preference. Because at that point, your middle finger and ring finger will be moving independently anyway.

This is a direct translation of SILLYB’s article, translated by Horie.