There are many things to consider when buying a controller.

In order of importance:

Please refer to parts page for an in-depth discussion on springs, buttons, and switches, especially if you’re trying to figure out what configuration you should buy.

Most controllers will have swappable parts that are compatible with arcade components. Usually, you have the option of buying the controller with your desired parts in it, or you can buy the parts after-market and swap them in.

If you live in a shared space, or in a place where noise easily travels to neighbors, you may need to consider getting a controller with membrane switches. It would be very unfortunate if you got a controller only to have your roommates and neighbors complain every time you try to play.

While there are many ways to reduce the noise emitted by a controller, it’s not all that effective.

The most effective method is to build a soundproof box around the controller: 1 2 3

PCB stands for printed circuit board; in this context, we are talking about how capable the logic board is inside the controller.

Required reading - for this section, you need to understand the difference between digital and analog turntable input:

Not all controllers have a PS2 port. Most controllers made in the 2000’s to 2010’s were made compatible with the PS2, but as of 2022 this has become much less common. If you care about playing CS releases, you’ll want a controller that works with the PS2.

It’s worth noting that DJ DAO does sell a USB To PS2 adapter which alleviates this issue, but it’s not compatible with every controller.

Keyboard mode for a controller allows you to use the controller as a keyboard, emulating keystrokes instead of joystick input.

There are some games that aren’t too happy with IIDX controllers operating in joystick mode. Some games would treat an analog turntable as a joystick that is always held down, some games can’t handle more than one controller, and so on; DJMAX is a good example.

For Infinitas, there are a few things to consider:

It’s better to double check before buying if the controller works well in Infinitas, especially in 120Hz mode.

For some controllers that only provide analog input, such as the Infinitas Premium controller, some users have written a tool to translate the analog input into digital input for LR2. PC_for_LR2 is one such example.

Fortunately, beatoraja will happily work with either digital turntable input or analog input, configurable in the options.

While this is not the most popular feature, some controllers can connect over BlueTooth and allow you to play beatmania Ultimate Mobile.

Poll rate refers to how often the controller sends input data to the PC. Usually, it’s either 250Hz (4ms between input) or 1000Hz (1ms between input). While 1000Hz is desirable, 250Hz is totally acceptable.

Turntable is the most complicated part of a IIDX controller; therefore, there are many aspects to consider.

Distance between the turntable and button #1 is another important factor, even more so than the size of the turntable. This has a significant impact on how you place your fingers during gameplay. Largely, there are two options:

For reference, above image is a US KOC model.

KOC has the turntable a few centimeters closer to the buttons than the AC dimensions, which makes a huge difference. In general, AC dimensions are more common and preferred by most players.

Size of the turntable

You basically have two choices: get a turntable that is the exact same size as the arcade, or get something that is much smaller. It’s actually easier to play on smaller turntable, mostly due to lighter weight – at least on SP. This is entirely up your preference; the usual recommendation is to go with arcade-size turntable, but you might be constrained by your budget or the space available.

Height of the turntable

Most controllers will have the turntable raised by a couple centimeters to match the arcade dimensions. Notable exception is the KOC which has the turntable sitting much lower.

Turntable deadzone is the distance in which the turntable needs to move in order for any input to register. This applies to both analog and digital turntables. If the deadzone is large, you have to spin the turntable quite a bit before the game recognizes it. If this is too large, it can make the game practically unplayable.

Turntable sensitivity refers to how fast the turntable turns in-game, relative to how much you move the physical turntable. While this doesn’t affect the game play too much, having the right sensitivity is useful in menu navigation and configuring things like SUDDEN+ lane covers.

Some controllers have adjustable deadzone and sensitivity settings.

IMPORTANT: Infinitas in 60Hz mode and 120Hz mode have different expectations when it comes to turntable input. A controller that works totally fine with 60Hz mode may experience significantly larger deadzone and reduced sensitivity when running the game in 120Hz. If you want to run Infinitas at 120Hz, you’ll want to ensure that the controller is known to work well with it. For example, older DJ DAO models (FP7, PEE, RES, RED) will be playable with Infinitas at 120Hz, but you’ll have to move the turntable more so than usual in order for it to register, which can be less than ideal.

Controller makers have experimented with various surfaces. There are a handful:

This is the most common. EMP refers to Empress, version in which this material was first introduced to the arcade cabinets. It looks like this: 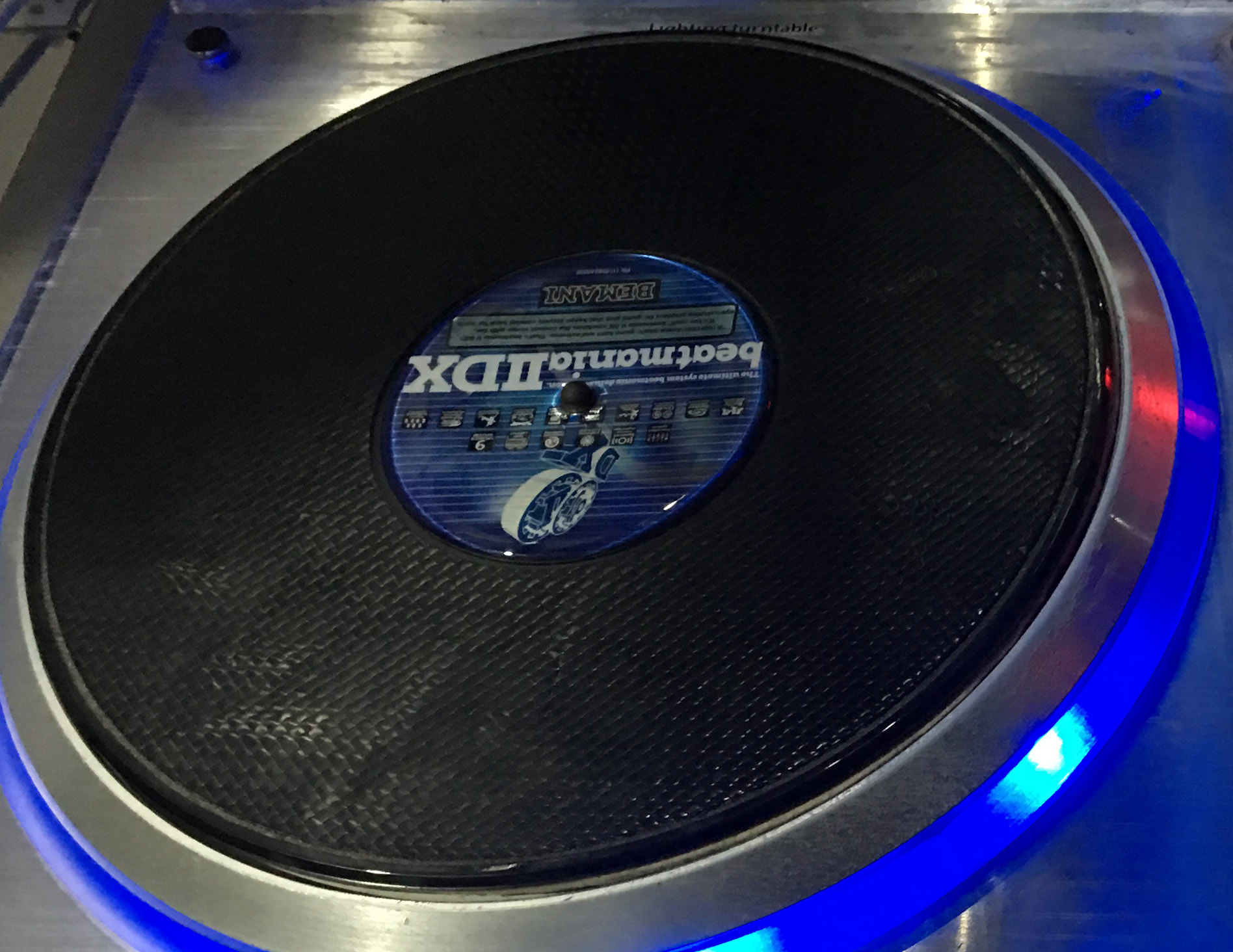 This is a slightly grippy vinyl material that has a bumpy texture. Note that Lightning Model cabinets have a slightly different texture that is more grippy.

This was the default turntable surface for arcade cabinets before Empress. This is just a layer of plastic, so most of the friction comes from your own hands. They are surprisingly playable, unless you have really sweaty hands.

KOC uses light plastic material that has a bit of a texture: 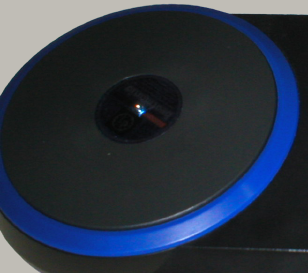 DJ DAO’s Phoenixwan uses a silicone material, which some people like (and others dislike): 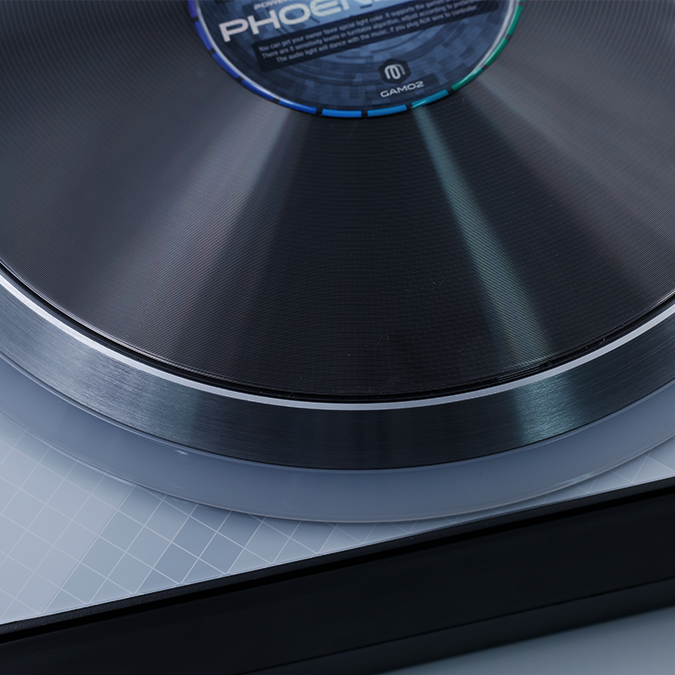 Lightning Model cabinet and the Infinitas professional model (2022) controllers use a unique grippy material that is textured and slightly rubbery:

Please note that not all controllers are covered here, just the popular options. IIDX.org is not affiliated with any controller makers. Page updated on 2022-09-05.

For most people buying a new controller, DJ DAO Phoenixwan+ (‘plus’) is recommended. Product page 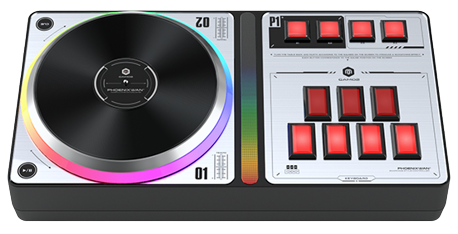 This is currently the best available option in the market. Its best feature is that turntable parameters are adjustable on the fly, while remaining fully compatible with Infinitas and LR2.

Sold for $279 USD before being discontinued (+$126 for Sanwa/Omron parts), plus shipping

Older model of Phoenixwan has known issue with its power supply, which usually results in various LEDs dying out over time, with some users experiencing complete failure of the controller.

FPS is an older controller by DJ DAO. Product page

KOC is the official Konami controller for Playstation 2, made in the 2000s.

Even though they have been out of production for a long time, the original JKOC is still in active use by many. The controller is still one of the best choices for PS2 CS releases, and works well with LR2 given the right adapter.

Finding a good adapter is the hard part. If you buy a generic PS2 to USB adapter, you will not have a good time. The recommended adapters are Elecom JC-PS101USV and Super Joybox 3.

USKOC, released with North American version of beatmania (2006), is not recommended, as users have reported various issues with using it with an adapter, such as low poll rate and dropped input. US KOCs have a rounded edge around the turntable, while JKOCs have a square edge.

DIY solutions exist to replace the PCB for KOC, or to redo the entire thing except the housing. Here is one example.

Since the launch of Infinitas, Konami launched three different models: 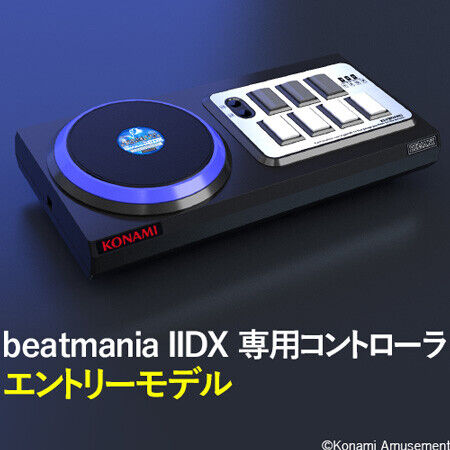 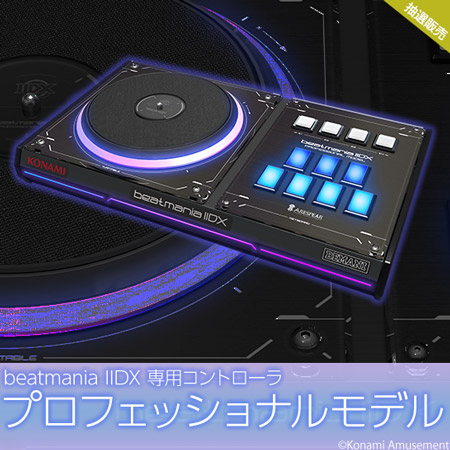 Entry model (2021) is a revival of the KOC, using membrane switches. The other two use arcade parts. All three of them only support analog turntable input, so if you want to use with LR2, you’ll need a third party tool like PC_for_LR2.

These controllers are good for Infinitas and beatoraja, but not recommended due to low supply and relatively high price.

These would include: FP7, PEE, RES, and RED:

FP7 was one of the most common controllers in the past; PEE is its bigger brother. All of these controllers share the same internals, only difference is the size. After the release of 120Hz Infinitas these are no longer recommended.

The main issue is that the turntable has a large deadzone and low sensitivity. This is especially bad with Infinitas in 120Hz mode; while the game is somewhat playable, you might have a tough time with scratch-heavy songs. If you mainly play PS2 CS releases or stick to LR2 on the PC, these are fine, however.

FPS is an exception, as the smaller turntable allows it to side step most of the turntable issues, even though it has the same turntable sensor and PCB.

Aftermarket PCBs do exist (e.g., arcin) which practically solves all of the issues with custom firmware, but as of 2022 they are hard to come by.

YuanCon has many different models of IIDX controllers, but they are made in small batches. While the recent models are generally recommended by the community, there are too many past revisions to accurately cover them here.

IST Mall also sells controllers, but they are not recommended due to poor build quality, especially regarding the turntable assembly, and subpar PCB.

Rhythm Cons wiki is good resource for both DIY controllers and pre-made controllers.

the-safari also has an article on buying a controller from a Japanese resident’s point of view.