Breaking out of bad habits (by SILENT)

This is an article provided directly by DJ SILENT, in English. Japanese video version is here.

Special thanks to DJ Mya for making this possible.

Hello, this is DJ SILENT. This time, I will talk about the “habit (KUSE)” of music games. The main themes are what a habit is, the cause of the habit, and how to cure the habit.

What is a habit?

A habit is one of the bad examples in a music game, and it is a phenomenon that the part gradually gets worse as you play the musical score that was successful before without problems many times. ..

The cause of the habit is that you unknowingly memorize incorrect information about the score. If you play it many times, you will unknowingly remember the wrong movement because the success cases, the success cases of the fluke, and the failure cases are mixed in your head.

How to cure habits

One way to cure the habit is to leave the song unplayed at all. It is a process of completely erasing memory by leaving it alone, improving basic skills, and then trying again from the beginning. However, this method has little immediate effect.

(1) Shortening : A practice method that divides difficult parts into smaller pieces and repeats them one by one. 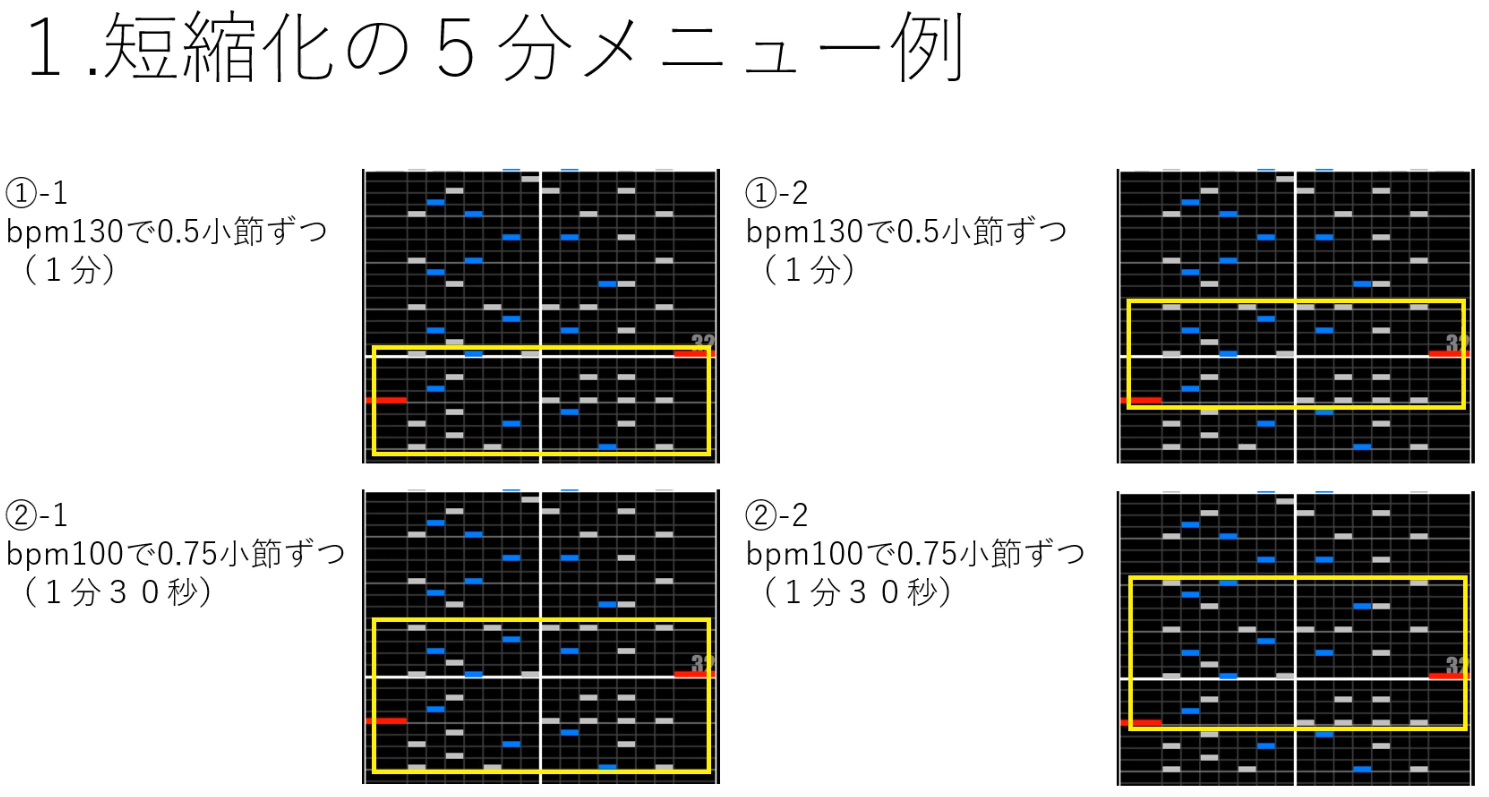 For example, if there are difficulties in two measures , instead of suddenly image-training all of the two measures, you should to decide a short section such as one measure and carefully repeat the section according to the metronome. It is better to have multiple patterns for the length of the section and the tempo of the metronome. After practicing enough measures 0 to 1, it is important to practice measures 0.5 to 1.5 instead of 1 to 2 next. This is because 0.5 bar increments practice before and after the bar line, so you can practice the musical score pattern carefully in all places. 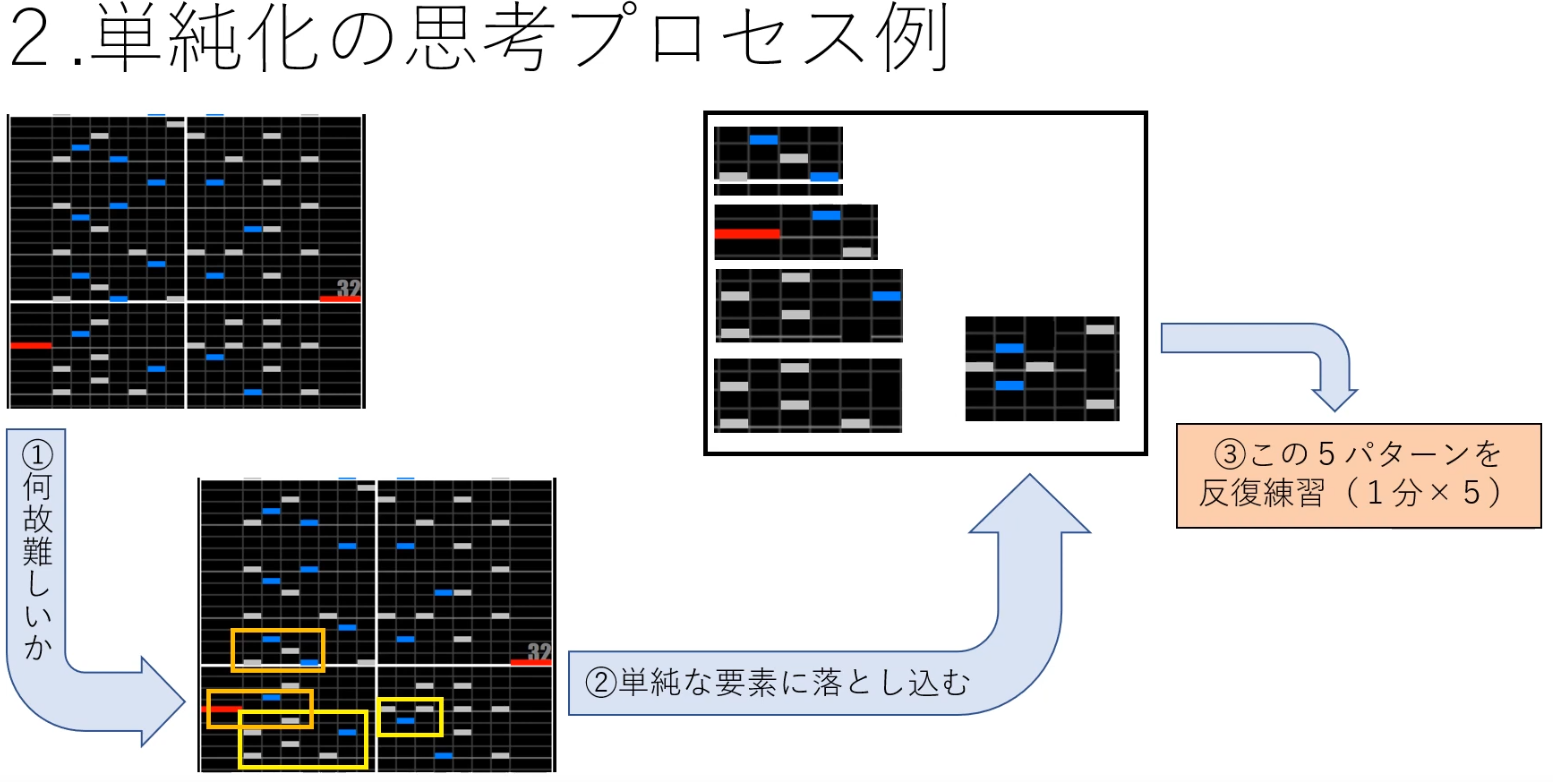 For example, if you want to overcome the 32 bar part of quell the seventh slave (DPA), you should to analyze why this part is difficult. As a result of analysis, 13 trills, “3 ⇒ scratch ⇒ 2” movement, movement of the index finger of the right hand, movement of the ring finger of the left hand are the main reasons why it is difficult. From the above results, practice 13 trill reciprocating movements, reciprocating keyboard and scratch movements, repetitive movements that the index finger is not good at, and repetitive movements that the ring finger is not good at. In this way, for one musical score, it is to interpret various elements that cause difficulty as simple patterns and practice them.

This practice method is useful when it is difficult to overcome even if you perform ① and ② explained above. The purpose is to give variation to the practice itself by devising various practice methods themselves.

I will explain two specific examples. 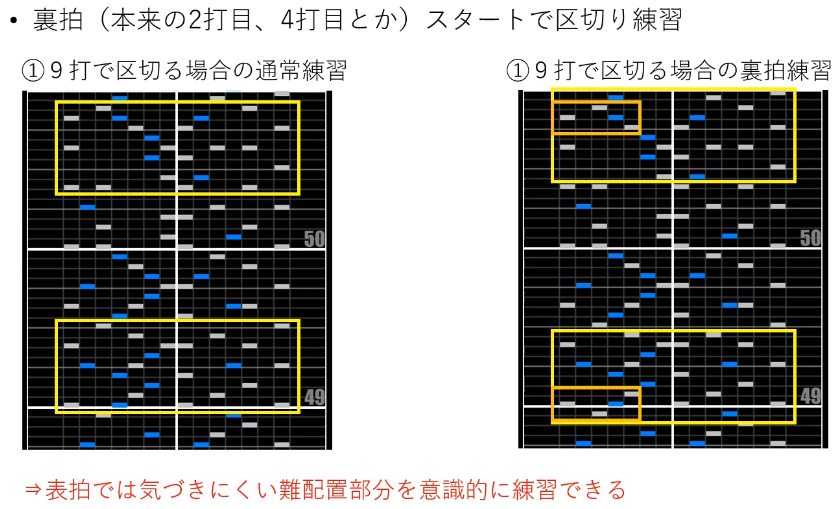 The first is to start with a back beat and divide the practice area. It is basically the same as the method explained in ①, but it is a more difficult practice because the start position of the section is the back beat start which is advanced by 16th note.