This is by no means a complete set of vocabulary used by IIDX players, but I will try to cover the common ones used in conversations and explain their meanings / origins wherever possible. Japanese, Korean, and English are the three commonly used languages in the community, so the equivalents will be covered in all three.

When you get a triple-A result - see here for details.

鳥 is pronounced “tori” as in “triple”. In Korean 트리플 (triple) is seldomly used in conversations. Most people just say AAA when writing.

When you get the easy clear lamp or above on all songs (typically for a folder, usually level 12).

全綠 is “all green” since the easy clear lamp is green in color. 표록 is a made up word as a variation of 표백.

When you get the hard clear lamp or above on all songs (typically for a folder, usually level 12).

全白 is “all white” since the hard clear lamp is white in color. 표백 means to “bleach”.

The word 歴代 / 역대 refer to “all time” as in all-time high score records set across past and present versions.

The Another difficulty of a chart, as opposed to Normal or Hyper. 穴 is pronounced “ana” as in “another”, an ateji.

When the random option results in a “bad” pattern, making it particularly harder to clear or to score.

Here is the list of class mode ratings (dans). Going from lowest to the highest:

Measure of your base ability to read and hit notes. Also (loosely) used as a measure of your skill level, sometimes with a quantitative measurement using a numeric score based on some formula; for example, Insane BMS recommend rating, or ereter.net clear ability rating. Usually this excludes skills that would be considered individual difference, such as scratches, sof-lan, charge notes, and so on.

The term “earth power” is a literal translation of 地力 that perhaps started out as a joke, but it stuck with the community.

The ex-hard gauge option - see this page for details.

Getting a full combo (no combo breaks) in a chart.

When the random option results in a “good” pattern, making it significantly easier to clear or to score.

Lit. “green number” in all three languages. GN indicates how fast notes come down from the top, commonly referred to as “scroll speed” in other rhythm games. See here for more details.

Camera footage focused on hands of a player, or the camera itself.

The hard gauge option - see this page for details.

On easy / normal gauge, even if you had 100% gauge throughout the song, if you miss notes near the end of the song, you can fail the stage. This is commonly referred to as ラス殺し or 후살 although in English people just say something to the effect of difficult end part.

Contrasted with earth power, these are set of skills that are outside of just hitting the buttons, and charts that include many examples of these elements. This would include scratches, charge notes, sof-lan, and charts heavy on jacks or chords.

High-level BMS charts, and community-curated collection of charts, and difficulty tables. See this page for details.

MAX refers to receiving the theoretical maximum score (all PGREATS). MAX-10 would be being 10 points away from MAX.

Play option used to flip the lanes horizontally, see this page for details.

Perfect refers to receiving PGREAT or GREAT judgement on every note. Excessive POORs are irrelevant.

乱 is an ateji of a kanji that happens to be pronounced “ran”.

Turntable notes, as in record scratch. Used as a verb (to scratch) and also a noun (scratch notes).

Playing a song or chart for the first time without any prior knowledge.

Lit. “white number” in all three languages. WN indicates how much of the play area is covered by SUDDEN+ or LIFT. See here for more details.

A chord with 7 notes, maybe with the scratch.

Column of evenly spaced notes, which tend to have bass (drum beat) key sounds. 軸 / 축 means axis, which is used in the context of more complex pattern that contains a bass column.

Example above is from 卑弥呼 SPA.

A set of notes that require you to press multiple buttons at the same time, as opposed to a single note.

This is a BMS terminology where the chart creator splits a single note into two or more, splitting the key sound audio into smaller pieces, creating more difficult chart out of an existing one.

The resulting pattern would be a zure pattern, but the word delay is also used in similar context. 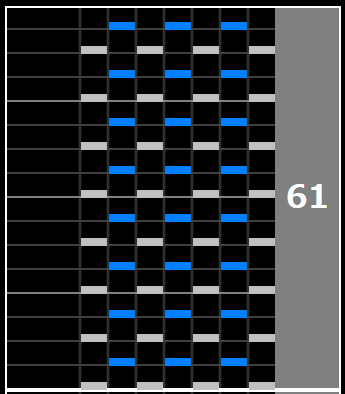 A pattern where succession of chords with alternating keys are presented. It comes from DENIM ANOTHER in 5-key beatmania, where this pattern was first introduced.

Example above from V SPA. 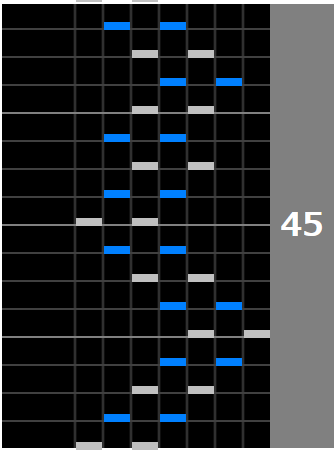 Stair pattern, but composed of two-note chords instead of individual notes. Example above is from Verflucht SPA. 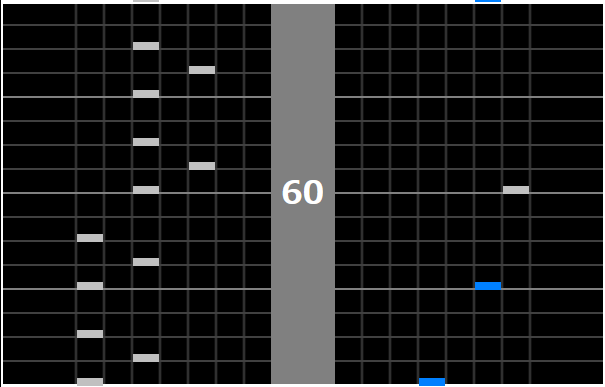 Refers to patterns shaped like > and <, a set of three (or more) notes where it moves in one direction and then quickly changes to the other.

Example above is from SigSig DPA, where the left hand shows this pattern. 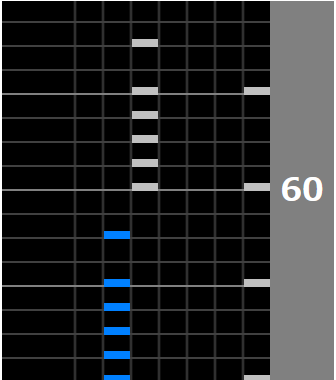 Terminology that comes from music theory describing how notes are spaced apart relative to the beats-per-minute (BPM). 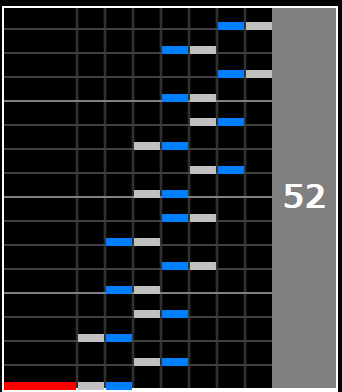 Patterns that have double notes in adjacent lanes, more often used in scenarios where it is presented in a series like the example above in 3y3s SPA.

When the BPM changes during a song, causing the note’s scroll speed to change as well.

The term soflan comes from the song SOFT LANDING ON THE BODY. While this wasn’t the first chart in beatmania series to have a speed change, it was certainly the first to use it as a gimmick.

As of Heroic Verse, the game officially adopted the terminology as it is used in the chart and player radar. 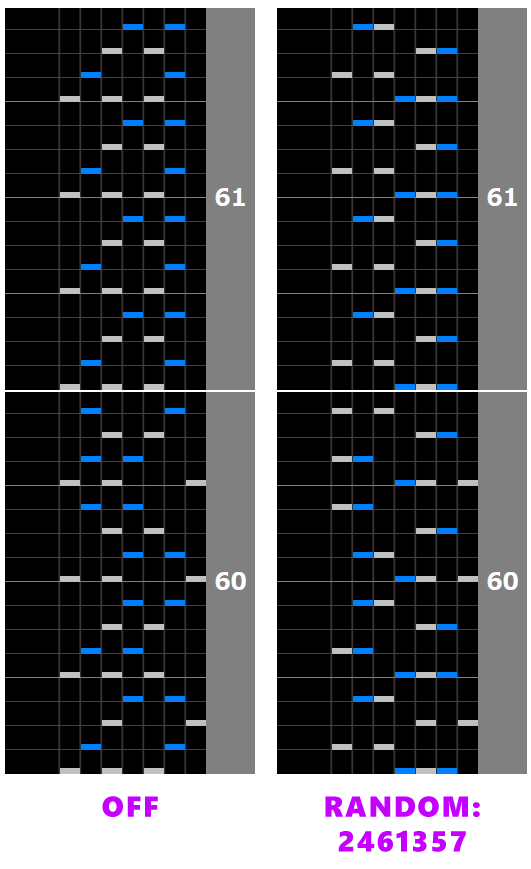 Slap random refers to a case of good random where the random results in (mostly) slap pattern. Sometimes people will say perfect slap for randoms that generate a clean split between left and right.

The example above is a slap random of Go Beyond SPA. 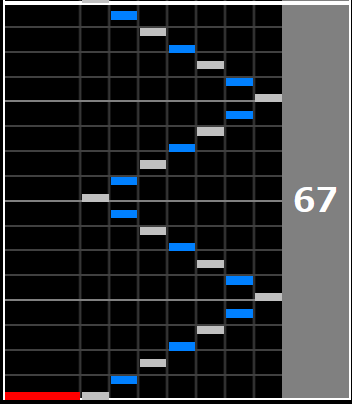 Note pattern that are composed of single notes going through consecutive lanes, resembling a staircase. In general they do not need to fully span all lanes to be considered a stair pattern, but they do need to have at least three notes in a sequence. Example above is from Nageki no Ki SPA. 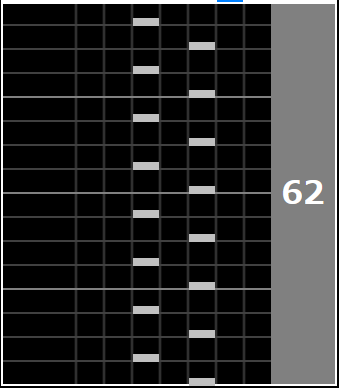 A sequence of alternating notes between two lanes, usually evenly spaced but not necessarily always the case.

Example above is from Colors SPA. 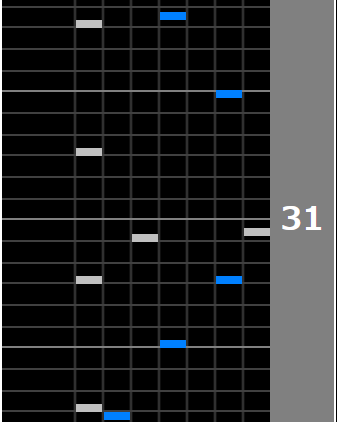 Notes that are only slightly apart from one another, usually in 24ths or 32nds increments.

Example above is from Happy Wedding SPA. In higher difficulty charts, extremely rapid bursts of notes are also an extension of zure (e.g., the end of quell).

A technique where, instead of hitting notes when you should be hitting them, you hit some of them earlier or later to simplify the overall pattern. Typically, this is used to turn complex patterns into a sequence of chords. Obviously, this sacrifices scoring (timing) but this can be used to clear songs.

Here is an example of a full combo on 3y3s with anmitsu technique - pay attention to 20 second mark.

Here is another example of anmitsu taken to the extreme, for playing DBM.

Anmitsu is the name of a dessert, but also the DJ name of beatmania 5-key player who played Ska a go go with this technique and popularized it.

In a dense (repeated notes) pattern when you end up with a series of FAST BADs.

This is due to the way IIDX timing works, a combination of:

The act of holding the start button and slightly moving the turntable to re-adjust the hi-speed so that it returns to the original green number, used to counteract changes in the BPM (soflan). See here for details.

Gachi means to take things seriously, and oshi here means to push. This is a technique where horizontal reading is used to put effort into hitting each individual note and chords accurately. It could be described as seeing any pattern as a series of chords.

This is a difficult concept to explain, but a crucial in high level scoring; see article on the-safari or its English translation for full details. 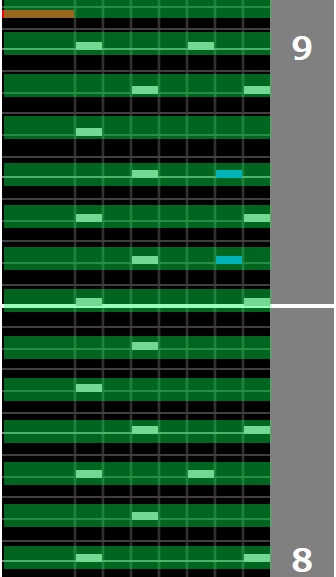 Reading technique where you divide up the pattern into horizontal sections, recognizing them as a sequence of chords. This is in contrast to vertical reading.

Example above is from Gigadelic SPH.

See article on the-safari or its English translation for full details.

Has origins in Hokuto no Ken (First of the North Star). 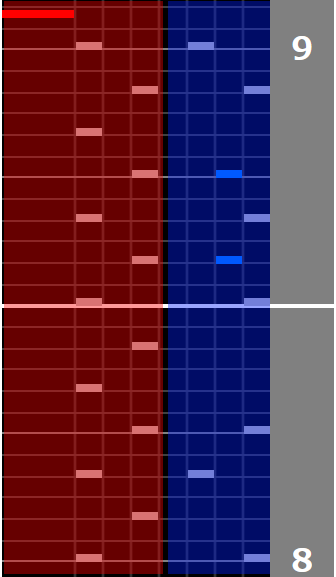 Reading technique where you divide up a pattern into vertical sections, reading a group of lanes separately (e.g., lanes for left hand, and lanes for right hand). This is in contrast to horizontal reading.

Example above is from Gigadelic SPH.

See article on the-safari or its English translation for full details.

DBM is turning Battle option, and Mirror on one side (1P or 2P side), which results in a symmetric pattern where one side receives the SP pattern and other results in a mirrored version of that. Usually it also implies turning on auto scratch.

DBR is turning Battle option, and Random on one side (1P and 2P sides), resulting in randomized SP pattern on both sides. Usually it also implies turning on auto scratch.

Landing as in touching down on the ground. This describes when you rapidly switch from the keys to hit the turntable.

着地 / 착지 are also sometimes used to describe doing the reverse (moving from the turntable and landing on the keys). 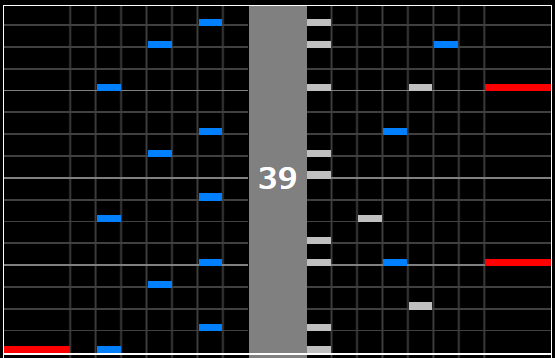 When you get a combination of note(s) and scratches on one that that is impossible to hit because they are too far apart. Example above is from Sweet Lab DPA; right hand gets two instance of impossible scratches in one measure. 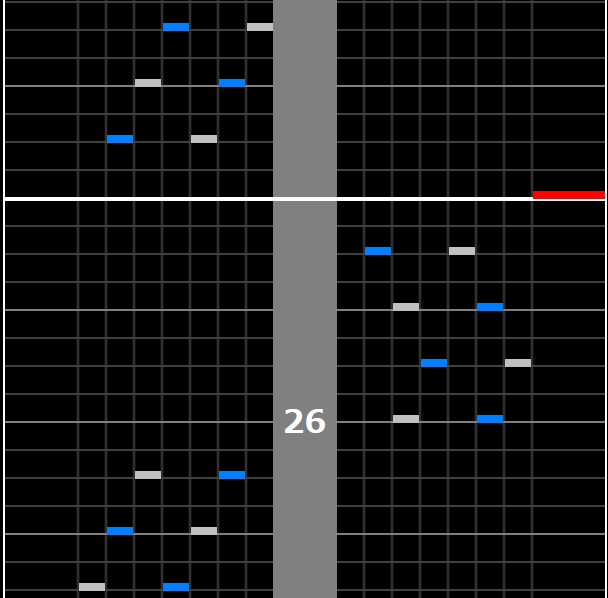 Two-note chords where the notes are 2 columns apart, kind of like how knights work in chess or shogi. This isn’t really notable in SP, but in DP this can be particularly confusing, especially if you get multiple of these in a row.

Example above is from Second Heaven DPA.

DP technique of using the middle finger to press button 5 or 6. See this page for details. 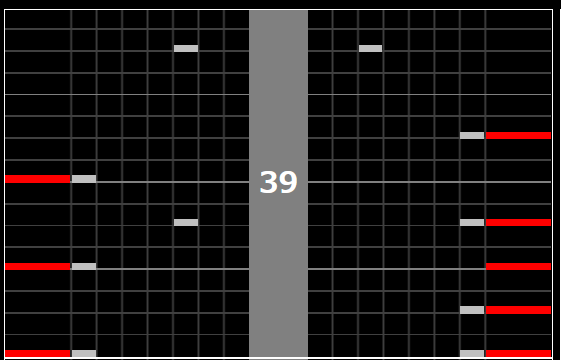 When the pattern requires you to hit both the turntable and key(s) with the same hand. Example from route 80s DPA, a chart that is full of these.

Combination of options where only FLIP and MIRROR options are used, including the standard (OFF) pattern. There are total of 8 patterns (OFF, MIR/OFF, OFF/MIR, MIR/MIR – and FLIP version of these four).

Technique used to “split” a chord into a series of notes instead, sacrificing timing for the sake of hitting all the notes (e.g., for full combo). Hence the name, reverse anmitsu.

This is used in DP to handle impossible scratches. Here is an example of quasar DPA (see 1:51) where left hand handles S+67 by hitting the turntable first and then quickly moving to hit 6+7.

Making use of your thumb to cover notes other than its base position.

親3, 親5 translates to thumb-3 and thumb-5. See this page for more details.

엄지테크닉 was a term popularized by EZ2AC 10-key players where they would press the 3 key with the thumb.

Use a combination of the following with options:

See this page for details. Here is a page in Japanese with suggested options for DP charts.